In former times the physical and morphological characteristics of the different species were taken to reconstruct the theory of evolution. With the emergence of the molecular biology also genes, particular chromosomal and mitochondrial DNA sequences, as well as whole chromosomes and genomes can be used. For example, the human chromosomes are very similar to the chromosomes of the great apes. The difference lies in human chromosome number 2. Instead of a single chromosome 2 the great apes have two smaller ones which contain the equal gene sequences. Therefore the original number of chromosomes in this group of species was 48 (as it is still present in the great apes today) instead of 46 (as it is present in the human). 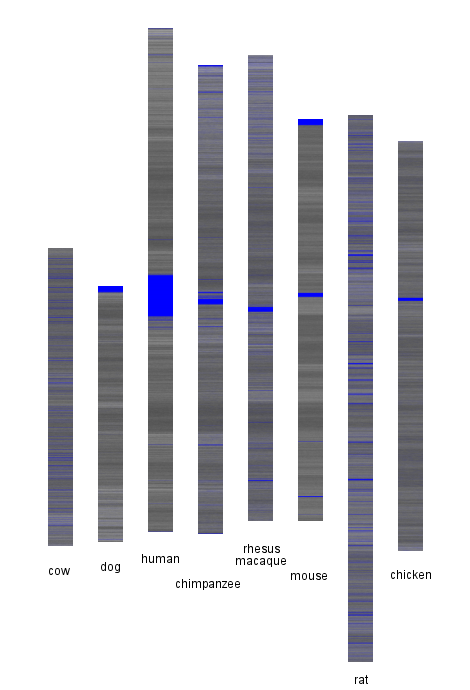 Comparison of chromosome 1 between different species

Normally the chromosomes of closely related species are more similar to each other than the chromosomes of more distantly related species. But not in all cases. In some species the evolutionary changes in the sets of chromosomes seem to occur significantly swifter than in others. A reason for this might be a more frequent manifestation of chromosomal modifications resulting from the lifestyle or social behavior of the species. For example, chromosomal mutations might establish much better in small groups of animals than in big herds.

Here we picked out some species and show their chromosome 1 next to the human chromosome 1. We rendered the chromosomes in the style of ideogram images and colored the A-T bases black and the G-C bases white. It reveals the characteristic banding pattern of chromosome 1 of each species. Blue areas in the rendered chromosomes identify bases not known yet.

To see the relations between the different selected species we additionally added a tree of their lineages.